Racing Towards a Hydrogen Future for Motorsports

Feature from Issue 4 of the Hydrogen Standard Magazine, available to download here

Forze is an initiative based in Delft, the Netherlands, that strives to show the world what can be done with hydrogen in the mobility field. For the past 15 years, Forze has been operating as a student-led team, with students working voluntarily for one year towards the advancement of this project. Here Coen Tonnaer, the team manager at Forze Hydrogen Racing, talks about what drives the firm.

What is Forze and your involvement in it?

To start at the beginning, the name Forze originates from Formula Zero, the world’s first-ever zero-emissions motorsport championship. While the competition, launched 15 years ago, was discontinued, Forze carried on. We aim to promote hydrogen technology to the world. And by doing that, we also educate ourselves because we’re students, and still learning. We do this by attempting to design, build and race the fastest hydrogen race car there is.

That has attracted many students over the past 15 years. The team is now composed of 60 students—30 full time and 30 part time. As team manager, I am working full time.

You started within TU Delft 15 years ago. Where does your relationship stand now? And where do you do most of your recruitment?

Indeed, we started as a part of TU Delft, but almost three years ago we became fully independent. While we do not have contractual obligations with them, over 90% of our recruits are TU Delft students or alumni. However, we’ve noticed an increase of applications from other universities, usually applied sciences universities, which will affect our hires over time.

Because the most significant part of our team works on the technology, we have a lot of mechanical engineers and electrical, software, and aerospace engineers. Within our business operations and management departments there’s a mix in study backgrounds, still mostly from TU Delft.

Many things seem to have changed since you started at Formula Zero in 2007. Can you expand more on Forze’s evolution in the past 15 years?

Formula Zero was a competition against other universities, where we built small hydrogen carts. While the competition was discontinued, we carried on making improvements on the technical side but also in the professionalisation of our operations and team. It allowed us to move on and enter a larger competition.

We went on to build the Forze VI, the first full-size fuel cell-powered race car. And one of its successors, Forze VII, became the first hydrogen race car to compete against petrol-powered cars on the track. There have been a lot of changes and improvements. As you would expect, these advancements have required an enlargement of the team, a bigger working space and more expensive equipment.

Access to a pool of highly qualified and passionate students—for no compensation—has been a considerable advantage. It also played an essential role in facilitating partnerships because our partners are confident that everything they contribute goes directly towards the development of our car or the maintenance of our workshop.

The one thing that hasn’t changed over the years is that we are here to spread a message.

How would you define your partnerships? And what is the extent of your collaboration with your main partner, Shell?

We have a lot of partners with one common interest: to promote hydrogen in mobility. Partnership formats vary a lot. Some provide us with in-kind services like consultancy services on a specific topic, technical or organisational. Others provide us with components, some of which are not yet on the market. We can, in return, provide them with data by testing these components at a very high level. And we also have financial partnerships.

In all cases, we remain entirely independent in our decision-making. As for Shell, we do a lot of collaborations with them. Although there was a strong exposure focus initially, we’ve recently been looking into expanding the partnership on a more technical level, specifically looking into their e-fuels and lubricants, some of which we will be using in our cars.

At this point, is commercialisation in your scope?

Our core mission remains to inspire and show what’s possible. We strive to do that in a niche where the technology can and needs to be pushed the furthest. Racing is an extreme sport, after all, and it is a direct reflection of quality and technology standards—every 10th of a kilometre in speed, every detail matters. If we can show it’s possible in racing, it is possible for all wheeled vehicles.

That’s what we try to achieve when we race against petrol-powered cars: to showcase a young team of students with a very young technology race against more professional teams working with well-established technologies. And we managed to get a podium place; we got second place in the sports car division. We are currently working on building our next car, the Forze IX. It will be a huge step up for us. In almost the same space, we want to double the power.

It will hold four motors, four tanks, and two fuel cells. It will be a considerable performance improvement. We would like to race against some of the fastest production cars around: the GT class, Lamborghinis, Ferraris, Porsches. That’s who we want to leave behind on the track, to show what’s possible. 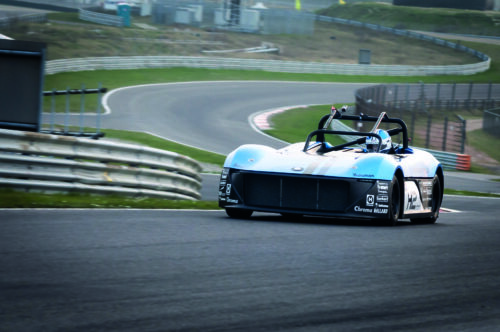 Could you expand on the decarbonisation of racing?

Formula Zero started as purely hydrogen. When the competition stopped after three years, we had done well there so we pursued the Formula Student competition. That’s a competition where top universities from all over the world participate. It is mainly conversion cars and, more recently, a lot of electric cars. We were the only ones doing hydrogen. And that’s really the core of our vision. We believe it’s an essential part of the energy transition. We want to promote hydrogen and show what it’s capable of.

I think the power of hydrogen lies in the bigger picture. The hydrogen revolution was kickstarted and driven by big industries. But if you zoom into the mobility industry, what’s missing is the infrastructure. The technology is there and presents many advantages, fast refueling and huge range, that weren’t reached with electrification. But we need the proper infrastructure to make use of it.

How do you envision the future of racing competitions given the emergence of all these zero-emission technologies?

We are still in most cases entering competitions where we’re the only hydrogen-powered vehicle. But the significant change we’ve seen in the past 15 years is that more and more people are picking up on the power of green energy. There is, for example, the extreme E competition looking into hydrogen. The Dakar Rally, which is also long distance, are also looking into hydrogen fuel.

There are also talks from the organisation working on the Le Mans races that they would like to have hydrogen powered vehicles enter the competition in 2025-26 or even start up an entire competition in that field.

Do you see manufacturers jumping on this bandwagon as a response?

For a long time, we’ve been the only ones in what we do, and we remain a unique team. But we see many automotive manufacturers—I would say almost every automotive manufacturer—building a fuel cell-powered car. All the big brands are getting into it, including one of our partners, Hyundai. They have a hydrogen vehicle already driving on the streets in the Netherlands. Our technical collaboration with them has been very fruitful.

We are developing our fuel cell system using passive recirculation for hydrogen. It has been great to have them as allies and consultants throughout the process.

You speak of mobility in general—are there plans outside of racing?

What we’re currently building is an LMP-type car, which is a Le Mans prototype car. I talk about mobility in general because this is an excellent technology for long-range mobility. But if you translate that to racing, that goes to long-distance racing, which is endurance racing. The most famous endurance race of all is Le Mans. And that is why we are building this car. What we also would like to do in the future is enter longer races with the Forze IX and show the level of competitiveness that we have. At this point, we would also need mobile refueling. You would need to refuel and go back on track in a very short time, which is where we think the power lies in racing. Of course, we’re building an LMP car, so the ultimate dream would be to end up on the Le Mans.

But in another sense, the aspiration is to reach beyond racing without necessarily changing our core activity. We want to show everyone what’s possible with mobility and hydrogen, and we see racing as the best way to promote this. We want to reach the public but also corporates and policymakers. That’s also why education is an important part of what we do. We have done tours around high schools this year. We’re also working on an educational package for primary schools, so we’re trying to get through to everyone. We would like to influence the whole picture.

Feature from Issue 4 of the Hydrogen Standard Magazine, available to download here

More Special Features
More
Go to Top
We use cookies on our website to give you the most relevant experience by remembering your preferences and repeat visits. By clicking “Accept”, you consent to the use of ALL the cookies.
Cookie settingsACCEPT
Manage consent

This website uses cookies to improve your experience while you navigate through the website. Out of these, the cookies that are categorized as necessary are stored on your browser as they are essential for the working of basic functionalities of the website. We also use third-party cookies that help us analyze and understand how you use this website. These cookies will be stored in your browser only with your consent. You also have the option to opt-out of these cookies. But opting out of some of these cookies may affect your browsing experience.
Necessary Always Enabled
Necessary cookies are absolutely essential for the website to function properly. This category only includes cookies that ensures basic functionalities and security features of the website. These cookies do not store any personal information.
Non-necessary
Any cookies that may not be particularly necessary for the website to function and is used specifically to collect user personal data via analytics, ads, other embedded contents are termed as non-necessary cookies. It is mandatory to procure user consent prior to running these cookies on your website.
SAVE & ACCEPT